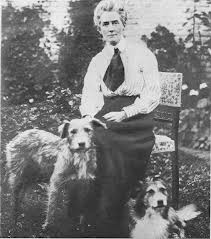 Today, in the aftermath of the bombing at the Boston Marathon, I was thinking about “peacetime” first responders and the medical personnel who risk their lives every day during war. For some reason, I remembered reading one of those orange, cloth-covered hardback biographies that were published for children (at least, when I was a child) about Edith Cavell. Wasn’t she a nurse?

I looked her up. Indeed, born in 1865, Edith Cavell, a vicar’s daughter, trained to be a nurse at the age of 40 and went to work as the matron of a newly established nursing school in Brussels, where she launched the nursing journal L’infirmière. By 1911, she was a training nurse for three hospitals, 24 schools, and 13 kindergartens in Belgium.

In November 1914, after the Germans occupied Brussels, Cavell began helping wounded soldiers out of occupied Belgium to neutral Holland. Prince Reginald de Croy furnished the British, French, and Belgian soldiers with false papers and got them to Cavell (among others) in Brussels. Cavell treated them and, with her collaborators, gave them enough money to get to Holland.

These actions violated German military law. Apparently aware of the danger, she is quoted to have said, “I can’t stop while there are lives to be saved.” She was arrested in 1915 and charged with treason for harboring Allied soldiers. She admitted that she had been instrumental in conveying about 60 British and 15 French soldiers and about 100 French and Belgians of military age to the frontier and had sheltered most of them in her house.

As a combatant nation, the British government said they could do nothing to help her. The United States, however, applied diplomatic pressure and other nations joined a plea for clemency. Baron von der Lancken, the German civil governor, stated that Cavell should be pardoned because she had helped save so many lives, German as well as Allied.

Of the 27 collaborators who faced trial, five were condemned to death. Three were later reprieved and two were executed. One was Edith Cavell. The night before her execution, she told the Anglican chaplain who visited her, “Patriotism is not enough. I must have no hatred or bitterness towards anyone.”

Edith Cavell is remembered for her duty, skill, and courage, as are all first responders, medics, doctors, and nurses who comfort and care for the wounded, wherever they fall.

This site uses Akismet to reduce spam. Learn how your comment data is processed.