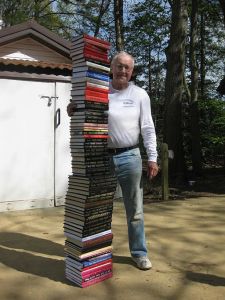 Roy F. Chandler standing next to a stack of the books he has written. Photo by Katherine R. Chandler/29 April 2009

I envy writers who write fast and well, who don’t seem to have the creative issues I have. Two, three, four, five, six, or even more books per year for these folks seems entirely within their grasp. I can’t write that fast. I never have enough ideas; concepts don’t jump out at me. I’m not one of the writers who say, “I have so many ideas, I don’t know what to write first!” No. I say, “What can I write about next? Must cogitate.”

I’ve always thought that a person is either an imaginative thinker or not—that’s it’s a genetic trait, a gift. It turns out, that’s not true.

Researchers Brian Lucas and Loran Nordgren report in the Journal of Personality and Social Psychology that people underestimate how many creative ideas they can come up with if they continue to work on a problem, rather than give up after mediocre initial results. In fact, the most creative ideas arise after many other ideas have been considered and discarded. People who give up too soon don’t allow the best ideas to emerge…

Source: Kay: The Value of Persistence

This site uses Akismet to reduce spam. Learn how your comment data is processed.