Kay Keppler is a writer and editor of fiction and nonfiction. She lives in northern California.
Standard 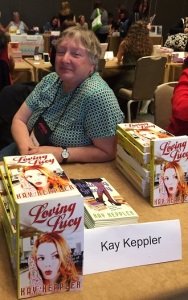 I’m definitely having a bad hair day in this photo, and I’m not sure you can tell how much fun I’m having, but this photo proves that I was at the indie author book signing at the RWA national conference a couple of weeks ago. I took my full-length novel (bet you can’t tell which one from the photo) and a shorter novella, and it was fun to meet potential readers. And it’s always fun to give stuff away.

The conference was packed, as always, and San Diego is a beautiful city. It was great to get outside occasionally and walk along the water, or just sit at the outside bar and enjoy a refreshing beverage with friends old and new. And it’s always fun to talk about books and writing and publishing. That just never gets old.

Vacation number #1, one and done! Next month, vacation number #2—a road trip to upstate New York. There won’t be any book signings, but there will be wine tasting, antiquing, the county fair, and sitting on the deck. Oh, and a refreshing beverage, or two, on the deck overlooking the Catskills. That never gets old, either.

Have a good summer, everyone!

Are you a fan of serials? Do you like to read your stories parceled out, or would you rather binge read on a weekend? See what Elizabeth over at Eight Ladies has to say.

Serialized or episodic storytelling is nothing new.  If you watch television, you’re already familiar with the concept, and if you watch broadcast television, rather than binge-watching shows from Netflix or something similar, you know what it is like to have to wait from one week to another to find out what is happening in your favorite shows.

During the Victorian Period,

I’ve been working on the second book of a planned three-part trilogy for a while—it seems like years, but it’s been just a few months. Time has been dragging because the book has been progressing poorly.

Sometimes I think all my books progress poorly, but this one really has hit Olympian heights of lousy progression. Everything is bad. My outline refuses to come together, and no matter how I approach it, I can’t seem to fill the holes. My writing is flat. To look at my story notes, you’d think I have enough good, strong conflict, but it isn’t working. I have a cute opening scene that I like a lot, but it doesn’t reflect the rest of the book or sufficiently introduce the story questions. If I cut that, I’ll be cutting the best thing in the book. I want to just keep writing—get that first draft done!—and so far, that’s been my path. I’ve got almost 45,000 words now, and I hate it. Nobody wants to read this mess, including me.

I see that I have three options, and two of those are related. The first option is, just keep going. Paste on my monitor all the book-finishing-affirmations from Nora Roberts that I can find (You can’t fix a blank page! Put your butt in the chair and write!) and just Get. It. Done. Quality comes with revisions, so get that first draft out of the way. Nora never gave up on a book, and I won’t either! GO!

The second option is, set it aside. For some reason, the story gods are capricious right now. It’s okay to obey them. Work on something else. Finish that. Then come back. Nobody says you have to get to Point B by climbing over the mountain and through the thistle patch when the paved road is right over there. By the time you get back to your story, that mountain will be leveled and the thistle patch paved over. A lot of writers jump from story to story, and it hasn’t seemed to hurt their overall output any.

The third option is, just forget about it. There’s too many stories out there waiting to be told. Even I, who brag that I have only one idea at a time, have several things I could be working on instead. I don’t have to bang my head against a stone wall. I wanted a trilogy? Forget it. A standalone works fine, too.

So what am I going to do? I don’t mind working hard, and writing is full of frustrations. I get that. But when a story isn’t panning out, it might be time to give it a rest. We’ll see how it goes in the next couple of weeks…

Does art imitate life? Over at Eight Ladies, Jilly reports on a study that shows what men and women really want when they go online to date.

Women prefer bravery, courage and a willingness to take risks rather than kindness and altruism in their partners.

The above statement is a direct quote from an academic paper about online dating, written by Professor Khalid Khan of Barts and the London School of Medicine and Sameer Chaudhry of the University of North Texas, published in the Journal of Evidence Based Medicine. I read about the paper in an article online this week and thought it sounded like story gold, so I took a closer look.

The paper’s stated objective is: to determine, for people seeking a date online, what activities and behaviours have an effect on the chances of converting electronic communication into a face-to-face meeting.

Or to paraphrase, how to win at online dating.

How creative are you feeling? Try this writing exercise. Elizabeth has picked out a few words that are united around a dance theme for you to write a short passage about. Use the exercise to jump-start your writing day, or just try it for fun. 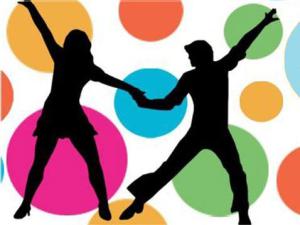 I’ve spent the afternoon listening to the soundtrack and brainstorming ideas for my contemporary romance that has been sitting fallow for weeks.  Thought I’d take a break and put all that creative energy to use with some Random Word Improv.

Care to join me?

Whether you wrote a lot, a little, or none at all this week, a few minutes of Improv are a great way to have a little fun and get some words on the page.  Feel free to put on your own soundtrack to get you in the mood.

All right, let’s get started.

Can you enjoy a book where the characters don’t seem to be much in conflict with each other? See what Elizabeth over at the Eight Ladies thinks.

We’ve talked about conflict a number of times here on the blog including Jilly’s post here, my Back to Basics post here,  and Justine’s recent Fiction Fundamentals posts here and here.

“Let’s be clear about one thing: conflict must be in each scene in your book. Every. Single. One.”  ~ Justine

Jenny Crusie also has a great set of posts all about conflict on her Writing/Romance blog, full of details and examples.  With all of these discussions, along with our McDaniel class notes and presentations, I think I’ve got a pretty good grasp on the role conflict plays in building a strong, engaging story.

“Conflict is a specific struggle between two people, the escalating action of which moves the story forward.” ~ Jenny Crusie

Have you always wanted to write a novel but couldn’t get started? Michille over at Eight Ladies Writing has been following the Writers Write blog for weekly goal setting, tips, encouragement, and hacks. See for yourself.

Writers Write is one of my favorite writer blogs. They are running a series right now called Write Your Novel in a Year (Anthony Ehlers is the blogger of this series). There is a new post every week and they are up to week 14. It’s set up with goals, breaking it down, time lock, quick hacks, and finishes with a quote. Each week, the post has information and suggestions under each of these topics. I am looking forward to the next in the series.

Have you ever signed up for a workshop to discover you didn’t have the time, energy, thoughts, or ambition to complete it? Here’s Nancy’s story, over at Eight Ladies

Sometime in January: Dear Diary, today I got an email notice that Donald Maas, author of one of my go-to writing texts, Writing the 21st Century Novel, is giving an online workshop in March. I want to take this class. I have no time for this class. I am crazy to even think I should consider this class. I WANT TO TAKE THIS CLASS. I cannot take this class.

March 11: Dear Diary, today I got an email reminder about an online writing class. Apparently, in a moment of abject denial about the reality of my life, I thought I could handle a class. While working 80-hour work weeks. Was I drunk?

March 15: Dear Diary, my online class started yesterday, and the first assignment – to write a blurb for a WIP – is due…

Characters that go through fire and come out stronger than ever are characters you want to read more about. See what Jilly has to say over on Eight Ladies Writing.

Happy Easter to all who are celebrating today!

For hundreds, maybe thousands of years the Spring equinox has been a time to salute the coming of light and new life (here’s a link to a Wikipedia article about the goddess Eostre and all kinds of Paschal traditions). Makes sense to me. I’ve always found this time of year to be my most positive, productive and creative. There’s something about the light that makes me feel energized and inspired. I get the feeling everything is new, change is in the air and anything is possible.

I was daydreaming yesterday about how much I’d like that feeling to saturate my current WIP when it struck me that almost all romance writing is about rebirth and reinvention. Maybe that’s why I find it such an effective pick-me-up in the depths of winter or when I’m feeling under the weather.

What triggers the actions of your characters? See how Jilly over at Eight Ladies Writing suggests you find their Go switch. Then you’re off to the races! 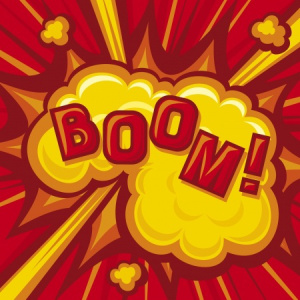 So far, so good. I’m still engrossed in the discovery stage of my fantasy WIP: growing the world, developing the community, digging away at the characters of my hero and heroine, adding images to my collection and tracks to my playlist – thank you so much for the great suggestions last week – and generally trying to knit together the jumble of impressions, ideas and loose ends into something vaguely coherent. Getting there. I think.

I’ve also been investigating lots of diverse subjects I know nothing about, including how to field dress a broken arm, much ado about horses, how to maintain a shaved head, leather armor, underwear through the ages, the history of soap, and lots more stuff about fighting.

I was talking to a knowledgeable friend about fighting, sketching out the essentials of the story, and I got to a turning point that makes the heroine commit to…