I read recently that the next (third) edition of the Oxford English Dictionary would come out approximately in the year 2034. This seemed like a really long time until I read more. The first edition was proposed in 1858 as a 10-year project. Five years in, the philolgists were up to “ant.” They needed 70 years to pull the first edition together. It came out in 1928.

The second edition was started in 1933 (so they got a little vacation in there) and came out in 1989. The third edition, now underway, began in 1994. It will have one million or more words in it.

These facts were interesting to me because when I was a young editor, I decided that when I was old and established and could afford it, I’d buy a copy of the OED and keep it on a book stand. To me, the OED was like a badge to a cop or a tiara to a princess. It was an emblem of certification, of accomplishment: I’m an editor, see? I have the best dictionary in the world.

For one reason or another, I never bought it. And now it’s probably too late. When the third edition is finished, it will have 40 volumes if it’s published in print. But the current editor, Michael Proffitt, says that unless at the time of publication a market develops for the print version, the reference will be placed online.

The work is going slowly because new words are being added to the vocabulary at an unprecedented rate. Each edition has more words than the last, because once included in the reference, no word is ever taken out. “We can hear everything that’s going on in the world of English for the last 500 years, and it’s deafening,” said the associate editor Peter Gilliver in an interview with The New York Times. Gilliver spent nine months revising definitions for the word “run,” currently the longest single entry in the OED.

The current OED text contains, in addition to literary references, blog and Twitter postings, quotations from gravestones, and an inscription in a high school yearbook. The philologists want to find the earliest and most illustrative uses of a word—not certify a word as “proper English.”

I feel a little nostalgic that my first professional icon of editorship—that of owning a copy of the Oxford English Dictionary—won’t come to pass. Of course, I could still buy the second edition (20 volumes for about US$1,700), or I could buy an on-line subscription. I probably won’t, though.

But I do love a good reference book. What writer wouldn’t? When you’re looking for just that one perfect word, it’s nice to know that somebody has compiled a million of them for you.

So here’s a little quiz. The following entries are in the OED. See if you know when these terms first appeared in the language.

OMG. The first recorded appearance of this breathless acronym for “Oh, my God!” comes in a letter to Winston Churchill.

LITERALLY. Examples of this inversion go back to 1769. Even Mark Twain did it.

1876 ‘M. Twain’ Adventures Tom Sawyer ii. 20 And when the middle of the afternoon came, from being a poor poverty-stricken boy in the morning, Tom was literally rolling in wealth.

1659 T. Fuller Let. P. Heylyn in Appeal Injured Innoc. iii, I Hope, Sir, that we are not mutually Un-friended by this Difference which hath happened betwixt us.

WHATEVER. It’s not as old as “unfriend,” but it’s been around for a while.

1973 To our Returned Prisoners of War (U.S. Secretary of Defense, Public Affairs) 10 Whatever, equivalent to “that’s what I meant.” Usually implies boredom with topic or lack of concern for a precise definition of meaning. 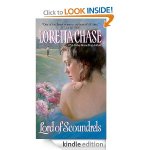 I’d meant to do a book of the month post every month, highlighting underappreciated books, but then…I didn’t. Today I want to mention a book (and an author) that are not underappreciated, but I have to add my appreciation to those who already read and love her: Loretta Chase, author of Lord of Scoundrels among many other historical romances.

I’m ashamed to say that I was unfamiliar with Chase’s work before I started this MFA, and Lord of Scoundrels was part of the required reading. First published in 1995, it’s still in print and still delicious. For those with a bent toward historical romances, this one is a must-read. Try this for dialogue:

“I believe I’ve remarked before, Trent, that you might experience less aggravation if you did not upset the balance of your delicate constitution by attempting to count,” said Dain….”I particulary recommend,” he went on, his eyes upon the female, “that you resist the temptation to count if you are contemplating a gift for your chere amie. Women deal in a higher mathematical realm than men, especially when it comes to gifts.”

“That, Bertie, is a consequence of the feminine brain having reached a more advanced state of development,” said the female without looking up. “She recognizes that the selection of a gift requires the balancing of a profoundly complicated moral, psychological, aesthetic, and sentimental equation. I should not recommend that a mere male attempt to involve himself in the delicate process of balancing it, especially by the primitive method of counting.”

Bertie approached, and in his playing-field confidential whisper asked, “Any idea what she said, Dain?”

Isn’t that wonderful? And all the dialogue is like that. I’ve now read a couple of other books by Chase, and they’re all good, but this one is still my favorite. You can find Lord of Scoundrels at fine booksellers everywhere. See if you don’t agree with me and the 296 4.5-star reviewers on Amazon that this one’s special.

P.S. Don’t be fooled by the cover. On the edition I have, the primary color is orange, and our smart and feisty heroine is dark and ravishing, as she should be–not pale and naked, as she is here. This is one good example of how you can’t judge a book by its cover.

Last month when I talked about the book I had most recently read, The Villa Dante, I said I’d write a monthly blog about a book that’s been lost or forgotten or maybe barely ever known. Having made it a Policy (because I’m so good with Policies), I wanted to think of a clever name for the Monthly Lost Book Post, so I could categorize the entries and they’d be easy to find. Well, not this month. I drew a blank this month. Maybe next month I’ll be able to think of a clever name. What do you think? The Irresistibles? The Irrepressibles? Something.

This month: Lightning that Lingers by Sharon and Tom Curtis, aka Laura London and Robin James. Sharon and Tom Curtis are hardly unknown—they sold a ton of books in the 1980s—but they haven’t written a new book in more than two decades as far as I can tell. They wrote romance novels, which they got into because they thought it would be fun. They hadn’t taken a class, and they didn’t have a clue. They just sat down one night after Tom got home from his truck driving job and Sharon got home from her book store job and started. Their best-known book, The Windflower, still sells (new) in hardback on Amazon for $423.78 and has 4.5 stars with 68 reviews. Not too shabby for a book that came out in 1984. 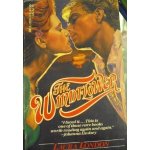 I didn’t get that book, because of not wanting to shell out $423 and change, so I went for Lightning that Lingers, which was a pittance by comparison, and the only book of theirs that’s available on the Kindle. Lightning that Lingers was originally a category romance that Loveswept, a Bantam imprint, published. It’s the story of a devilishly handsome wildlife biologist who sleeps with baby owls to keep them warm and harbors a disabled chicken in the kitchen. (I’m sure Sharon and Tom wrote that on purpose, just so we could say “chicken in the kitchen” out loud.) Our heroine is a shy librarian (okay, 1984, people).

The book is a little dated—there are references to M*A*S*H* reruns and est:

“If that’s the best fight you can put up when you think something horrible is about to happen to you, I’m going to enroll you in est. Do you know what’s in front of us?”

Her heart had given up its weak effort to do anything more than syncopate, and all she knew how to do was handle this strange thing that was happening to her one moment at a time. She pretended to squint out the blank front windshield before she said, “A dumpster?”

And that’s why so many people like Sharon and Tom Curtis’s work, I think. Because it’s well-written and heartfelt and unexpected. And sometimes, laugh-out-loud funny.

You could do a lot worse than read Lightning that Lingers. Other books by the Curtises are still available used for a lot less than the $423 new hardback price I quoted.